Discrimination Against Women in Formal Credit Markets: Reality or Rhetoric? 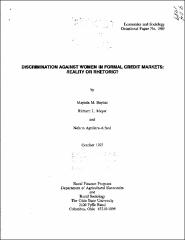 Microenterprises receive several forms of aid; however, many are denied access to formal finance. It is often argued that women entrepreneurs are frequently discriminated against in formal credit markets, but these arguments are often based on rhetoric and advocacy rather than rigorous analysis. In this study, the results of a multinomial logit model show that although a smaller total number of women than men entrepreneurs applied for loans, women entrepreneurs represent a higher proportion of applicants. Interestingly, the small probabilities of both male and female entrepreneurs being quantity rationed implies that this form of credit rationing is not widely exercised in special microenterprise programs in Ecuador.