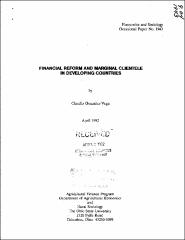 This paper explores the implications of financial reform for marginal clientele in developing countries. It first surveys increasingly more ambitious attempts at reform, as a consequence of the failure of the old interventionist and protectionist strategies of development. It claims that the role of government has shifted from the control of financial prices and amounts to the preservation of macroeconomic stability and financial system solvency. Financial reform is a necessary but not a sufficient condition for increased access to financial services by marginal clientele. Actually, lack of access is due to a much lesser extent to market failure than to incomplete organization and limited institutional and physical infrastructure. Belief that the observed patterns of interest rates and limited access to formal credit in rural financial markets were due to market failure led, however, to the incorrect design and eventual failure of most small farmer credit programs. The main flaws were a generalized lack of concern for risk and for institutional viability. In addition to new policies and institutional design, however, financial innovations will be required. Local financial institutions may become sources of innovation, but cannot reduce systematic risk sufficiently. The development of financial market systems and networks will be needed in order to overcome the limitations of local intermediaries, both in a micro and a macroeconomic sense.