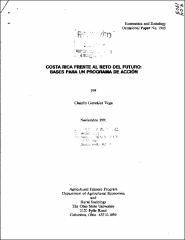 This paper addresses the economic growth challenges faced by Costa Rica in the 1990s. Economic welfare depends both on the country's capacity to produce and its ability to profitably sell goods abroad. The author examines the contributions of these two factors throughout Costa Rica's history, focusing on the role of coffee exports in the nineteenth century and the export boom of the 1960s. Other determinants of growth during 1950-80 are examined, as well. The development strategy adopted during this period suffered from intrinsic weaknesses: (a) openness was conditioned by the small size of the Central American Common Market, (b) investment was largely financed with foreign savings, and (c) protectionism and rent-seeking lowered the productivity of the economy. Domestic long-term structural trends and short-term macroeconomic mismanagement led to the crisis of the early 1980s, which allowed a consensus for policy reform to arise. An economic program for the future would revise the role of the state and increase the role of the market. Foreign trade, entrepreneurship, institutional development, and domestic savings need to be promoted. Commercial policy and financial reform are the key for future growth. The political requirements for implementation of this program are examined, as well.