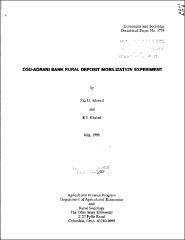 Three models of incentive mechanisms to mobilize rural bank deposits were experimented with between February 1, 1986 and April 30, 1986 in three branches in each of two regions in Bangladesh. One model, the Tangible Incentive Model, was designed to test tangible incentives given to depositors, in addition to the normal interest income, for opening a new account or adding to an existing account and maintaining in those accounts an additional deposit of Tk. 500 or more for at least 90 days. Prize bonds valued at one percent of the eligible deposit balance were given to the depositors. Another model, the Marketing Model, was designed to test the impact of cash incentives paid to two specially appointed Field Assistants in the branch for marketing of bank deposits. The Field Assistants were paid Tk. 150 per month for incidental expenses, and an incentive bonus of one percent of eligible deposits mobilized of Tk. 1000 or more, and 10 or more accounts opened or reactivated. The third model, Employee Incentive Model, was designed to test additional financial incentives given to existing branch staff beyond the benefits currently provided. The branch staff, except the Manager, received the same incentive bonus and at the same rate as the Field Assistants in the Marketing Model. Over 800 new accounts were opened or dormant accounts reactivated in the six branches through the experiment. Total deposits of Tk. 1.4 billion were mobilized by these accounts. These deposits ranged from one percent to over eight percent of the branch's existing deposit base. The increase in number of accounts ranged from over one-half of one percent to almost thirteen percent of the branch's existing number of accounts. The Tangible Incentive Model produced the most cost effective result in generating new deposits and deposit accounts at the lowest cost per taka or per account mobilized. This model clearly shows that rural deposits can be mobilized by direct incentives. The overall implication of the experiment is that banks can mobilize rural deposits if serious efforts are made to reach this objective with appropriate incentive schemes.