"Intimations of Freedom" : the human condition in four novels by J.M. Coetzee 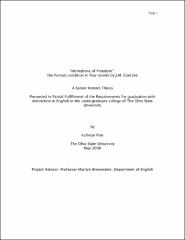 This thesis consists of two parts – “An analysis of the personal and political in Coetzee’s aesthetics” and “Revisions and regenerations: history and genealogy in South Africa” – and each part contains two sections – On Language, On Form in Part I and On History, and On Generations in Part II. In the opening of each section, I present the theory that informs my work. In the first half, I analyze the structural aspects of Coetzee’s writing that support the subversive nature of his texts. Michel Foucault, Jacques Lacan, Walter Benjamin, and Adorno and Horkheimer’s critique of elaborate social structures and codifications provide a framework to understanding the fabric of South Africa and more specifically Coetzee’s writing. In Part II, I examine the historical, political, and social implications within Coetzee’s plotlines and character relationships. My approach to the novels is two-fold: Coetzee’s themes intrigue me, and the methods through which he explores those themes are equally engaging and important. His novels contain characters who face a violent world, and the narratives often focus on the body in distress. Meanwhile, the intimate, visceral imagery in his writing performs a kind of violence upon the reader. The effect is not so much to shock us into attentiveness; rather, I believe we are drawn toward the characters even as we participate in their alienation. We are also drawn into these texts by key linguistic tropes. Foremost are relentless repetitions and modifications of specific words which take on a political significance. These features, in their places within and across Coetzee’s texts, operate as markers from which a cohesive understanding of the author’s oeuvre develops.