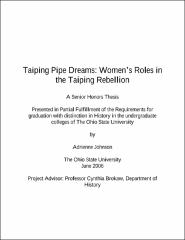 During the mid-nineteenth century, the Taiping Rebellion challenged the very nature of the Chinese imperial system. This rebellion attempted to overthrow the Qing Dynasty, and impose not only a new government but also a new culture. One facet of this new culture was a differing view of women's roles. For over two millennia, Chinese women suffered under the oppression of men. They were subservient to their fathers, husbands, and even sons. Women were secluded in inner chambers and expected only to care for the household. Attractiveness was based upon the size of a woman's feet, which would be torturously bound when she was still a young girl. Under the Taiping code, these social customs changed. Feet were to be unbound and women to be brought forth from the inner chambers. They were given rights that were previously unfathomable to women. The Taipings promised to liberate the women of China. This thesis will focus on the question: Did the new gender policies of the Taiping Rebellion truly offer women a better life? The hypothesis is that, while the Taipings claimed to be liberating women, they did not change the attitudes toward nor significantly improve the lives of women. Why did the Taiping program fail? First, many men under the rebellion found it difficult to accept the new status of women. Second, the rebellion was tainted with hypocrisy, as even the leaders would sometimes ignore their own policies and continue to subjugate women. Third, social change was forced upon women as the Taipings swept through southern China, often to the detriment of the women that they were supposedly saving. Thus, while the rebellion had a great impact on female roles, it failed to reach its stated goal of improving the lives of women from the oppression endured under the Qing Empire. In order to highlight the influence of the rebellion, I will be comparing the roles of women in the Taiping Rebellion to those of women in the Qing Dynasty before the rebellion. I have collected a number of primary source documents from the period: accounts from missionaries, Chinese legal codes, writings of Europeans associated with the rebellion, and documents from the Taiping rebels. These texts will be analyzed and synthesized to create the thesis. The role of women in Chinese society is a complicated one, too often boiled down to foot binding and arranged marriages. This paper attempts to give a more intricate and accurate portrayal of women at a highly volatile time in Chinese history. It explores not only the roles of women within Qing society, but focuses the very different roles proposed by those who dissented from imperial rule. By comparing and contrasting the roles of women in the ruling dynasty and a rebellion against it, this paper will give a truer idea of the social standing of Chinese women during the period of the Taiping Rebellion. Advisor: Cynthia Brokaw