The Impact of the Invasive Species, Lonicera Maackii, on Soil Microbial Communities in Riparian Forests 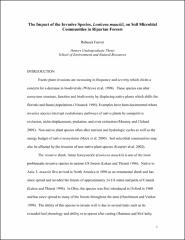 One of the most problematic invasive plants in forests of the eastern US is Amur honeysuckle (Lonicera maackii). This species is known to have negative impacts on native plant communities, but little is known about its impact on soil processes. To determine the impact on soil processes, the catabolic response profile (CRP) method was used to assess the functional diversity of soil microbial communities in invaded riparian forests. The microbial functional diversity is determined by measuring the catabolic response of a soil microbial community to specific carbon-based substrates. Soils were collected from three riparian forests in Franklin County, Ohio that have been invaded by L. maackii. In each forest, 16 samples were taken from invaded and non-invaded plots. CRP measures short term respiration responses to substrates within 5 groups of organic substrates in 1 g of soil in a 25 mL serum bottle. The CO2 evolved in the headspace of each bottle was analyzed with a LI-COR CO2 analyzer. Diversity is measured by richness and evenness. Richness is the number of substrates catabolized above basal respiration and evenness is found using the Simpson-Yule index (E = 1/Spi2). A one-way ANOVA was used to test the variance in evenness between the invaded and non-invaded plots within each site and over all three sites. The richness for each plot was 18, the highest quotient in this study, therefore the focus was on evenness. The variance in evenness was found to be slightly higher in L. maackii plots than control plots (p=0.009). However, invaded and non-invaded plots showed no difference in substrate use when analyzed by PCA and ANOVA for each substrate. There is no evidence that L. maackii has a substantial impact on soil microbial communities in riparian forests.