The Mass Media Effect: American Perception and Attitude toward Africa 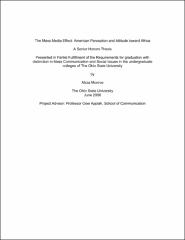 News, educational, and electronic media introduce and perpetuate a simplified African continent or showcase extreme environmental/social conditions in Africa. 128 news articles from America’s largest daily newspapers were content analyzed. The results have indicated that African violence is portrayed disproportionately. After evidencing negative media portrayal through newspaper, the opinions of 235 adolescent and young adult, middle school and high school students were involved in a controlled experiment with 5 survey conditions to measure overall perception of Africa. The results indicate that media exposure manipulates perception of at least the eating habits and diets of Africans. Based on the textual content and/or photo content frame of the news story to which individual respondents were exposed, their opinion of the severity of famine/hunger of an African population varied. The study is a starting point for institutionalized reform of international media coverage of African countries. The next acceleration of the African Growth and Opportunity Act should include the enhancement of media social responsibility in portraying the realistic diversity of the 800 million Africans, reflecting and promoting increased American private investment—not charity—to the continent, which benefits Americans and Africans.