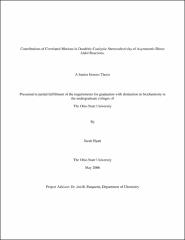 Biological macromolecules, such as proteins, maintain a high level of internal organization through non-bonded interactions such as hydrogen bonds, pi-pi stacking, and non bonded intermolecular electrostatic forces. However, the ability to control similar synthetic microenvironments has presented considerable difficulty. The globular structure and structural stability of dendrimers places them among the few synthetic macromolecules available which are potentially capable of mimicking biological systems. Many systems have been designed with linkages which are too flexible, thus rendering them incapable of the structural stability exhibited by molecules such as proteins. The specific class of dendrimers investigated here has been shown to exhibit cooperative motions due to structural preorganization and hydrogen bonding interactions. It is the aim of this project to achieve an understanding of the influence of correlated dynamic motions on the selectivity of a chemical process within a microenvironment. These correlated motions have been shown to increase the helical bias of dendritic secondary structure, and current research has shown that these correlated motions contribute to the amplification of the stereoselectivity of a catalytic process as well. Research on this project is underway to determine the scope of this reaction in terms of substrate specificity and stereoselectivity.

Pfizer
The Ohio State University Colleges of Arts and Sciences