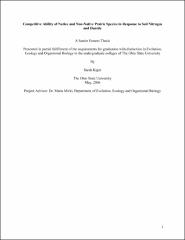 The objective of this paper is to determine how competitive response varies between the prairie native Solidago rigida and the closely related Solidago canadensis, an invasive prairie species. I tested the idea that invasive species would exhibit greater biomass under increased nitrogen levels, while native species would not show significant difference across differences in nitrogen. I tested to see if variations in plant density changed how both of these plants respond to increased and ambient nitrogen levels. I found the invasive S. canadensis to have significantly higher biomass than the native S. rigida at high nutrient availabilities (total biomass: F1, 1 = 15.34, p =.0002). I also found that biomass for S. canadensis decreased as soil nitrogen levels decreased, while biomass for S. rigida did not decline from high to ambient nitrogen and at some densities it increased. While change in biomass from high to ambient nitrogen decreased at all densities for S. canadensis, the highest four densities for S. rigida demonstrated an increase in biomass. Our findings suggest that that as soil nutrients decrease, competitive dynamics between native and invasive species change. The results show that when grown under lower soil nitrogen conditions, S. rigida may be able to outcompete invasive neighbors, particularly when local densities are high. The findings also show the importance of considering density when comparing invasive and native responses to soil nitrogen, since S. rigida only exhibits a higher level of competitive ability at high densities and low levels of nitrogen.