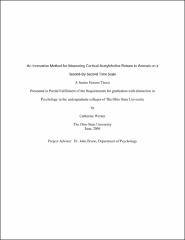 Acetylcholine (ACh) is critical for normal attentional processing and is implicated in the craving and relapse cycle of addiction. Microelectrode technology provides a novel second-by-second way of measuring the effects of drug administration on neurotransmitter release and degradation, and vastly improves upon spatial and temporal resolution of microdialysis. Ejections of nicotine (1 mM, 80 nL), an addictive drug that has been shown to increase cortical ACh release, were hypothesized to result in ACh signal peaks that rapidly attained peak amplitudes and then were rapidly cleared to baseline. It was also hypothesized that because the ACh signal is dependent upon the degradation of ACh by acetylcholinesterase (AChE), the administration neostigmine (10 μM), an AChE inhibitor, would markedly attenuate nicotine-evoked ACh signal peaks. Nicotine and neostigmine were administered in the prefrontal cortex in seven anesthetized rats. After baselines were collected, nicotine was ejected and evoked ACh release was measured for peak amplitude and clearance time (average pre-neostigmine amplitude was 3.58 μM and average pre-neostigmine clearance time (t80) was 6 sec). Following the nicotine ejections, neostigmine was perfused through a dialysis probe. Nicotine ejections were repeated. Following neostigmine exposure, the ACh signal peaks and clearance times were markedly attenuated (average post-neostigmine amplitudes decreased 71% to 0.89 μM and average t80 increased to 8 sec). Clearance rates (μM/sec) were also attenuated by 85% after neostigmine administration. Microdialysis collections were taken for the duration of the experiment and analyzed for ACh concentrations. Time controls and saline ejection controls were also performed as negative controls.