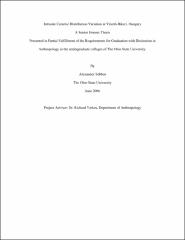 This project seeks to explore the areas of specialization and use patterns of the ceramics found at the Copper Age site of Vésztő-Bikeri in south-eastern Hungary—a site that was once inhabited by people of the Tiszapolgar culture. Using the vessel type classification system created by Ida Bognar-Kutzian from her work in Copper Age Hungarian cemeteries, the Tiszapolgar pottery found at this site has been grouped into categories based on vessel form and assumed original usage. The ultimate goal of this project is to use spatial analysis and Bognar-Kutzian’s system of vessel type classification to determine where and how ceramic vessels were used in Tiszapolgar house structures. Although there were nine blocks (trenches) excavated at the site of Vésztő-Bikeri, this project only focuses on two of the nine. Two suspected house structures and a midden (trash pit) are the foci of this study. Both of the suspected houses are from the Copper Age, but they represent different phases in the occupation of the site. These structures are being examined to determine whether or not differences in ceramic vessel usage exist at different points in time. The basis for the spatial analysis of this project is the Excavation Unit. An Excavation Unit, or EU, is defined as an individually-dug section of each block that varies in size so as to best conform to the features of the site. The number of each of the vessel types in each EU has been mapped according to its position in its respective block. Clusters of vessels may be revealed by studying these maps and these clusters can be used to determine the ways in which different segments of the house structures were used. Project Advisor: Dr. Richard Yerkes