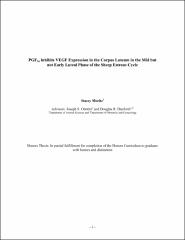 Vascular Endothelial Growth Factor (VEGF) is important for blood vessel development in a variety of tissues including an ovarian structure, the corpus luteum (CL). The CL is a transient endocrine gland that secretes progesterone, which prepares the uterus for pregnancy. In the absence of pregnancy, the corpus luteum regresses in response to endogenous prostaglandin (PG) F2α. Deficiencies in luteal function during early pregnancy may result in embryonic loss. Understanding of the mechanisms of luteal function could aid in the development of new methods to regulate fertility. Corpora lutea are susceptible to the luteolytic effects of PGF2αafter day 4 of the luteal phase; prior to that time the CL does not regress in response to treatment with PGF2α. The mechanisms responsible for the acquisition of responsiveness to PGF2α and the specific intracellular mediators of PGF2α induced luteolysis are unclear. The objectives of this research were to investigate if exogenous PGF2α affects VEGF mRNA expression in sheep corpora lutea and to determine if the effect is dependent upon whether the corpus luteum has not (early luteal phase CL) or has (mid-luteal phase CL) acquired luteolytic capacity. Mature female sheep (n=18) were randomly separated into two groups (early luteal phase, day 3, and mid-luteal phase, day 10). Each group was divided into two treatment groups, PGF2αtreated and saline-treated (control). From each animal, one CL was removed at 2h and a second CL was removed 24h after treatment. Total RNA was isolated from each CL, purified, and verified for integrity. Real-time Polymerase Chain Reaction (PCR) was used for relative quantification of VEGF mRNA. The real-time methods were optimized and validated using two endogenous reference genes; β-actin and L-19. The quantity of VEGF mRNA present in each sample was standardized using the reference genes and was expressed as fold change from the mean value for the control CL collected on day 3 at 2h. Luteal progesterone concentrations were determined using radioimmunoassay. Data were analyzed using analysis of variance for a split plot design with sheep as the main plot and CL as the sub-plot. Quantities of VEGF mRNA were similar among CL collected during the early versus mid-luteal phase in the control animals (p>0.05). PGF2α had no effect on VEGF mRNA levels in early luteal phase CL collected at 2h or 24h after injection (p>0.05). In contrast, on day 10 of the estrous cycle, PGF2α treatment resulted in a marked reduction of VEGF expression within 24h after injection (p=0.002); it is unclear if VEGF expression was changed during the first 2h after PGF2α administration at this stage of the cycle. There was no effect of PGF2α on luteal concentrations of progesterone during the early luteal phase (p>0.05). This is consistent with the expected lack of response at this stage. In contrast, PGF2α caused a decrease (p=0.03) in luteal progesterone in mid-luteal phase CL, demonstrating that these corpora lutea have acquired luteolytic capacity. Since the mid-cycle CL has acquired luteolytic capacity, it will regress in response to PGF2α. As such, the decline in the message for VEGF was associated with luteal regression. We conclude that inhibition of VEGF and subsequent vascular destabilization may be an important component of the luteolytic cascade invoked by PGF2α.

We would like to thank The OARDC Research Enhancement Competitive Grants Program, The Ohio State Undergraduate Enrichment Grants Program, and William C. Hauk Memorial Scholarship Fund for funding this research. We would also like to thank Ann Ottobre, Laura Arbogast, Amanda Roberts, and Janelle Gaddis for their intellectual and technical contributions, Dr. Horacio Cárdenas for donating the L-19 primers used for real-time PCR, and Dr. Normand St-Pierre for statistical consultation.