In the wake of 9/11: The effects of identity self-categorization on the emotional and behavioral tendencies of individuals 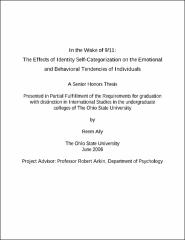 Within this study we move beyond past research to explore the emotions induced by identity self-categorization and the emergence of behavioral patterns based on these emotions connected to the events of 9/11. The social identity of participants was manipulated to include a broad and a narrow identification of the victimized in-group (American students; Western students) and a broad and a narrow identification of an opposing out-group (hostile Arab nations; hostile foreign nations). It was found that in the most narrow in-group and out-group condition, participants indicated the highest levels of sadness and anger as well as the most support for militaristic policies. The explanation for these findings rests with the notion that when the specific in-group was made salient (American students), participants were led to categorize themselves within a closely related in-group to the victims of 9/11 about whom they had just been reminded. Consequently, this study supports the notion that identity can be manipulated in a subtle manner that increases emotional reactions and increases the support for certain political policies over others. Advisor: Robert Arkin