Impacts of Economic and Socioeconomic Changes on Potato Use 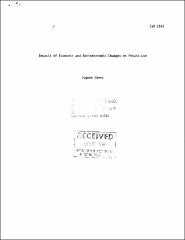 Total per capita consumption of potatoes remained constant between 1970 and 1985. However, consumption of fresh potatoes declined 20 percent, while consumption of processed potato products increased 20 percent. Decreased fresh consumption is attributed mainly to increased consumer income, growth of away-from-home food consumption, and a larger proportion of women in the labor force. Interestingly, these are also the factors which boosted demand for processed potatoes. As usage of processed potatoes grew, production shifted from Northeastern States, which produce predominately fresh-market potatoes, to Pacific Northwestern States, which produce predominately processing potatoes. Many Northeastern States are shifting acreage out of round white potatoes and into russet potatoes. This trend, as well as other economic and socioeconomic factors, could impact regional shifts in production and total potato consumption.