The changing face of retail: Wal-Mart's effect on retail sector employment in Mexico 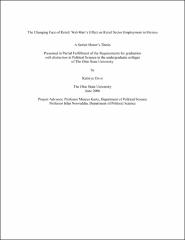 This study is designed to isolate Wal-Mart’s effects on the retail sector employment index in Mexico at the federal entity level. As Wal-Mart is the largest supermarket chain in Mexico and the largest private employer, the case will be made that the findings are indicative of the greater effects of the modern retail sector on the traditional retail sector. On a broader level, this paper will argue that the retailer justly serves as a representative of the Latin American Supermarket Trend, a phenomenon that has been propelled by the trade and investment liberalizations institutionalized by the ratification of NAFTA. The statistical analysis consists of various regressions using two weighted Wal-Mart store variables; as the dataset is time-series and cross-sectional, panel corrected standard errors and autocorrelation corrections are used. Controlling for economic, political, geographic, and time trends, the results indicate that Wal-Mart’s presence has a negative effect on the retail sector employment index. Furthermore, the retailer is not creating retail sales but is rather acquiring a larger piece of the retail sector pie. The entrance of one multinational corporation resulted in negative externalities in both the retail and agricultural sectors. Policy makers must consider the externalities associated with the pursuit of international economic integration and take appropriate measures for those unable to compete. Advisor: Marcus Kurtz, Ph.D. Advisor: Irfan Nooruddin, Ph.D.

The Ohio State University College of Social and Behavioral Sciences