A Qualitative Approach to Understanding the Rate of Chemical Weathering, Taylor Valley, Antarctica 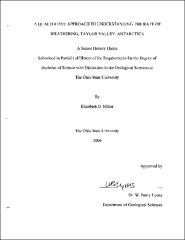 The relationship between temperature and chemical weathering is well established, with higher mean annual temperatures leading to increased chemical weathering rates. In an attempt to ascertain if chemical weathering occurs in polar desert landscapes such as the McMurdo Dry Valleys, Southern Victoria Land, Antarctica (mean annual temperature of approximately -20°C), a series of stratovolcanoes of the McMurdo Volcanic Series were investigated. Nine volcanic cones of known age, ranging from 1.57-4.76 Ma, were sampled. Liquid water availability is extremely limited in these areas. By studying the loss of calcium ions through leaching during weathering, it was determined that chemical weathering of these cones is indeed occurring, but only where there is flowing water. Initial calculations suggest that the rate at which the weathering front penetrates into fresh rock in this polar desert ecosystem is approximately three to four orders of magnitude slower than rates observed in temperate regions. Additionally, the net chemical loss of calcium through leaching is 11 g Ca/ha/yr, four orders of magnitude slower than values observed in forested temperate regions.