Creating the Post-Industrial City: A Study in Conflict 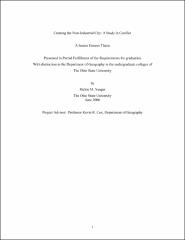 The post-industrial city is a term used in academia to describe a particular sort of city, distinctive in terms of its division of labor, the spatial distribution of people across its landscape, and an increasing emphasis on revitalization projects, particularly in the central business district. The organizational make up and infrastructure of such cities stands in stark contrast to the urban centers that emerged during the industrial revolution. Cities such as Cleveland, Detroit, Pittsburgh and Buffalo grew rapidly during this time in American history since they were centers of manufacturing. But following the Great Depression and World War II, this gave way to other forms of production in which white collar employment was more dominant. Cities which had built their fortunes around steel mills and factories looked on as businesses began to close and people moved to surrounding suburbs, facilitated in part by increased automobile use and the construction of superhighways. Central city decline and a subsequent central city problem was the prelude to revitalization in the form of the post-industrial city, an urban center where the labor forces is primarily composed of people in the tertiary and quaternary sectors of the economy. As one might imagine, the process of creating the post-industrial city was characterized by substantial conflict, particularly between public and private interests. These differences of opinion focused on the financing of major development projects downtown, such as the construction of convention centers, stadia and the related gentrification that takes place in the downtown and adjacent neighborhoods. Although the process of getting these projects built can be frustrating and time consuming, they are often approved through ballot initiatives or financed via other means. As far as Columbus is concerned, city and business leaders, have for the most part, been aligned with one another on redevelopment projects downtown. This has usually put public and private officials at odds with residents in the greater Columbus area. But in the end, venues such as Nationwide Arena and the Convention Center have been built. Columbus served as a case study in which to observe the development and controversy surrounding the post-industrial city.