Rural Deposit Mobilization in the Philippines, 1977-1986 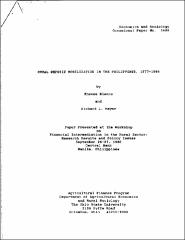 The government of the Philippines has long implemented policies to reduce the urban bias of the financial system and expand financial services into rural areas. Much of the effort during the past couple of decades was focused on expanding agricultural lending. The performance of the banking system in mobilizing rural deposits, however, is a better indication of the extent to which viable banking services have penetrated rural areas. This paper reviews trends in rural banking during the past ten years with an emphasis on deposit mobilization. Data on rural income, expansion of the rural banking network and costs of alternative funds are presented as key determinants of rural deposits. The results show a steady increase in rural deposits throughout the period, but the proportion of total rural to urban deposits reveals only a small increase. Rural loans exceeded rural deposits through 1983 but, due to a decline in rural lending, beginning in 1984 deposits exceeded loans indicating that the urban to rural flow of funds had been reversed. The urban deposit to GDP ratio has been roughly ten times larger than the rural ratio (0.8 compared to 0.08) suggesting a substantial scope for rural deposit mobilization. Surprisingly during the post 1981 decline in GDP per capita, the urban deposit to GDP ratio fell while the rural ratio remained constant and even rose in 1986. This suggests that rural depositors held a larger share of assets in a financial form during the recessionary period of the 1980s than during the growth period of the 1970's.