Soybean Shipping Patterns in the United States for 1985 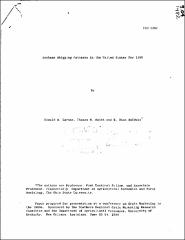 Information about soybean shipping patterns that enables the soybean industry participants to improve market performance through better decision making will contribute to a more efficient flow of soybeans. Such information may improve the investment decisions in port facilities, rail, truck and barge services, elevator and processor facilities, and farm production. The objectives of this paper are to determine regional soybean flows by mode of transportation for 1985 and compare these flows with similar data for 1977. Soybean flow data were collected for the 1985 calendar year through personal interviews, mail surveys and telephone calls with representatives of the soybean handling, storage and processing firms in 36 states. The volume of soybean exports for 1985 is slightly less than for 1977, and the distribution of these exports by region reveals significant changes. The Gulf exports more than any other region and has become relatively more important from 1977 to 1985. Soybean exports from the Great Lakes have declined significantly and the Atlantic region exports have declined slightly in this period. The biggest relative increase in soybean exports occurred in the Pacific region. Changes in international markets, unit train shipment rates and increased size of ocean shipping vessels are the major factors explaining the changes in export shares among regions. This trend may continue into the 1990s affecting production, transportation and shipping patterns by export ports. Barge shipments continue to be the dominant mode of transportation for export soybeans, accounting for 73 percent of all movements in 1985 compared to 61 percent in 1977. Truck and rail shipments declined from 16 to 8 percent and 23 to 19 percent, respectively, in this same period. Transportation deregulation does not appear to have helped the railroad compete for export bound soybeans. Strong competition among modes of transportation due to excess capacity in rail and barge transportation facilities in 1985 may explain this failure of railroads to gain market share relative to barge shipments. The elimination of the excess capacity since 1985 may change the rail-barge competitive structure during the 1990s.