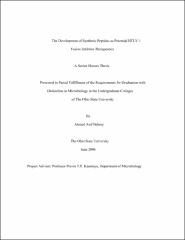 Human T lymphotropic virus type 1 (HTLV-1) was the first isolated retrovirus and is the causative agent of Adult T cell leukemia or Tropical Spastic Paraparesis which develops in 6-10 % of HTLV-1 positive individuals. Viral transmission takes place vertically or horizontally via cell to cell contact and syncitia formation between infected and non-infected cells. The viral envelope is responsible for the attachment and entry of the virus into the host cell. Env is composed of two subunits: Gp 46 referred to as the surface subunit, and the gp21 transmembranous subunit. It has been proposed that gp46 is mainly involved in host cell receptor binding and gp21 is involved in post binding events resulting in the fusion of host cell membrane with the infected cell membrane. There has been no effective cure against HTLV-1 and it is resistant to conventional means. Therefore investigations in possible therapeutic approaches are very important. One possible therapeutic strategy against HTLV-1 is the use of peptide fusion inhibitors to prevent transmission of the virus. Two peptide sequences, 400-429 (P400) and 197-216 (P197) from gp21 and gp46 respectively, have been shown to inhibit syncitia in in vitro HTLV-1 transmission studies. These investigations have been supported by a similar success with HIV. T-20, a potent viral fusion inhibitor, is analogous to P400 in that it was designed to mimic part of the transmembranous subunit, gp41 of HIV. Consequently it interacts with gp41 inhibiting viral fusion from taking place and therefore limiting viral infection. T-20 clinical trials have shown that HIV viral load declined in AIDS patients after a series of T-20 administration. One observed drawback of using T-20 is its short bioavailability leading to frequent dosage and consequentially resulting in the high cost of treatment. The goal of this project was to develop versions of P400 and P197 with longer half lives using the retro-inverso peptide modification strategy. This involved the use of protease resistant D-amino acids instead of the biologically relevant L-amino acids while inverting the peptide backbone sequence to achieve the same side chain orientation as the parent peptide with a similar retained function. In this project P400 was compared with a previously described mutant of HTLV-1 (Pcr400) in order to determine the best candidate for retro-inverso strategy. Using a three cell line syncitia inhibition assay, it was found that P400 was more effective at inhibiting syncitia and was chosen for retro-inverso (RI) development. Retro-inverso P400 (RIP400) was synthesized, characterized, and evaluated with P400 to determine if similar efficacy levels would be retained. It was found that RIP400 was less effective then P400. However RIP400 displayed comparable efficacy with the second documented fusion inhibitor P197. Further investigations were conducted using cross-reactivity ELISA to explore the reasons behind the discrepancy observed. Furthermore, a peptide sequence 175-218 (a potent B cell epitope) of the gp46 region was compared with P197 for the possibility of a better alternative to use for the retro-inverso strategy. No difference was observed between both peptides. P197 was also tested in combination with P400 for a possible synergistic effect since they target different subunits, which may encourage the development of RIP197 as a combination with RIP400. The finding of this investigation revealed that no synergism was achieved. Because of the inability to find a better version than P197, the absence of an added advantage of using P197 in combination with P400, and the cost of retro-inverso peptides, the pursuit for RIP197 synthesis was not completed. This project explored the possibility of developing potential longer half-life therapeutics against HTLV-1 through the use of retro-inverso modification strategy. It has been shown that the retro-inverso strategy was successful with RIP400 peptide in its ability to retain partial and significant efficacy from its parent peptide. Further in vivo and half life experiments are necessary for confirmation about the actual efficacy of the potential therapeutics and the success of retro-inverso strategy in increasing half life of treatment. This project has important implications in HTLV-1 therapeutic development. Advisor: Pravin T. Kaumaya