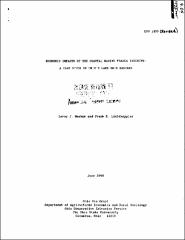 If Ohio's north coast marine trades industry is characteristic of the national coastal industry, marine trades may be in rapid transformation from a local family-owned industry to one dominated by a few large firms owned by outside investors. The number of marinas increased from 237 in 1979, to 383 in 1986. The only shift in the distribution of firms was the transfer of 7 percent of the firms from the $1.0 to 2.0x106 in sales group to the over $2.0x106 group. This shift of large to very large firms can potentially generate major changes in the nature of marine trades. Marine services on Ohio's Lake Erie generated estimated gross sales of $342.4x106 which contributed $151.3xl06 to regional value added sales, $56.lxl06 to personal income, and 3,347 full-time equivalent jobs. The total economic impact attributable to marine trades in 1986 is $233.0x106 in value added sales, $158.2xl06 in personal income and 5,121 full-time equivalent jobs, a significant industry in Ohio's Lake Erie coastal economy.