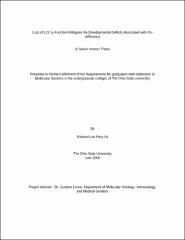 The Retinoblastoma (Rb) gene was the first tumor suppressor discovered. In many, if not all, human tumors Rb is functionally inactivated. In a normal cell, the Rb protein is a transcription regulator that controls the cell cycle, differentiation, and cell death. Studies have shown that mice carrying one Rb mutant allele (Rb+/-) are highly cancer prone and do not live as long as wild type mice. Furthermore, completely Rb deficient embryos (Rb-/-) die in mid-gestation around the 14th embryonic day (E14) of development. Analysis of Rb-/- embryos reveals defects in hematopoiesis, neurogenesis, and lens fiber development. At least in part, these defects arise from the inappropriate regulation of the cell cycle. Studies of Rb function have led to the discovery of the E2F transcription family. The E2F family of transcription factors are downstream targets of Rb and work with Rb in controlling the cell. Numerous studies indicate that the E2F family of transcription factors regulates expression of genes that are important for cellular proliferation. To date, eight E2F family members have been identified. E2F3 is unique in that it has been demonstrated to play a role in the G1/S phase transition. Recently the gene locus for E2f3 was found to encode two distinct mRNAs, E2f3a and E2f3b. They share homology throughout the protein sequence from exon 2 to the C-terminus. Both proteins share the same nuclear localization signal, DNA binding, heterodimerization, and pocket protein binding domains; however, E2F3a has an additional cyclin A binding domain. Furthermore, E2F3b is expressed constitutively in quiescent cells, but E2F3a is tightly regulated and present in proliferating cells. Unlike E2F3, mice lacking E2F3a are healthy and show no other signs of reduced viability or livelihood. E2F3a being a downstream target of Rb suggests that its loss could mitigate the Rb-/- phenotype. To test this hypothesis an in vivo approach was used to generate E2F3a-/-; Rb-/- double mutant embryos. The embryos were harvested at E13.5 at which point cells from the placenta, blood, central nervous system, peripheral nervous system, and lens were examined. BrdU incorporation was used to distinguish proliferation and TUNEL assays were used to detect apoptosis. Also, H & E staining was used to examine overall morphology of the different tissue types. As predicted by the hypothesis, the lack of E2F3a completely compensated for the loss of Rb in the placenta and central nervous system. In the peripheral nervous system and the lens the loss of E2F3a partially rescued the Rb-/- phenotype, but the red blood cells showed no rescue in the reduction of nucleated cells. Interestingly, the E2F3a-/-; Rb-/- embryos survived up to E17.5. More experiments are being done to assess whether the lack of E2F3a increases the lifespan of Rb+/- mice that are cancer prone. Elucidating the specific functions of the E2F family members is critical to understanding the intricacies of cell cycle regulation, tumorigenesis, and differentiation. Working to completely comprehend the interaction between E2F3a and Rb during development could lead to new insight into understanding cancer.