Variations in upper troposphere temperatures and stability indices over the past 46 years in the Gulf of Mexico, and the Influence a Warming Earth has on Tropical Systems 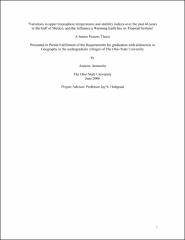 The 2005 hurricane season was the most active hurricane season on record, and it was as destructive as it was active, ravaging areas along the Gulf Coast, especially Louisiana and Mississippi. The 2005 hurricane season was a continuance of the recent trend in hurricane activity. Since 1995, the Atlantic Ocean has experienced a period of increased hurricane activity. A large debate has arose on the cause of the increased activity with many attributing the active period to global warming, while others tend to place blame on the North Atlantic Multi-decadal Oscillation. Both sides of the argument were examined in this research project by computing CAPE (Convective Available Potential Energy) and running a model developed by Holland to compute the maximum potential intensity of hurricanes given the thermodynamic state of the atmosphere. Especially strong storms have developed in the Gulf of Mexico during the past two years. Hence, the Gulf was chosen as the area for investigation. Monthly averaged reanalysis data were obtained throughout of the Gulf of Mexico (24 degrees N 90 degrees W, 27 degrees N 90 degrees W, 24 degrees N 85 degrees W, and 27 degrees N 85 degrees W) at the surface and at 12 different constant pressure levels (925, 850, 700, 600, 500, 400, 300, 250, 200, 150, 100, 70 hPa). Data were collected for the months when the hurricane season is at its peak, which is August through October. It is hoped that the results will contribute to the global warming debate, and describe how hurricane strength and atmospheric instability has changed in the Gulf of Mexico since 1960.