Writing the War: The Literary Effects of World War One 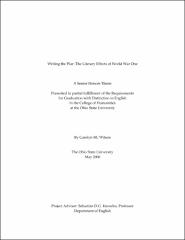 World War One was a cataclysmic event not only in terms of world history, but also for the literary world. The war’s extreme brutality led to an outpouring of literature concerning its conduct and effects that began with the war poets themselves, extended through the interwar period, and reappeared periodically throughout the twentieth century. For this project, I have used traditional literary analysis to explore the war’s effect on literature – specifically, I analyzed the work of five poets and six novelists. I chose these works based on personal preference, chronological range, and the recommendations of my advisor. In addition, I relied on secondary sources by Modris Eksteins and Paul Fussell for cultural contexts, biographical background, and specific details concerning trench warfare. Other works influenced the project, even if not extensively considered, and are noted in the Works Cited pages. In this project, I have sought to confirm and call attention to the literary effects of the Great War; its importance cannot be underestimated when we consider British literature of the twentieth century. In order to emphasize this point, I have considered not only “traditional” war literature – the poetry of Siegfried Sassoon, Wilfred Owen, Isaac Rosenberg, and Robert Graves – but also novels by Modernists D.H. Lawrence, Virginia Woolf, poetry by T.S. Eliot, and even later novels by Evelyn Waugh, W. Somerset Maugham, Pat Barker, and Robertson Davies. In evaluating these works, I found that the war remains a common theme in the lives of characters, whether real or fictional, but that the nature of the war experience changes over time. For instance, while World War One is a source of horror and suffering to the war poets, it becomes the harbinger of personal growth and change for characters in The Razor’s Edge, by W. Somerset Maugham and Fifth Business, by Robertson Davies. I introduced Pat Barker’s novel Regeneration out of chronological sequence (by date of publication) in order to accentuate the fact that the novel, published in the late twentieth century, engages with texts from the Modernist period without responding directly to World War Two-era (and later) works. I feel that Barker’s work is a significant hinge in the research project, since it reflects one of my own purposes in pursuing this research: to explore and renew interest in World War One and in the experiences of men who lived, fought, and died in the trenches. My thesis is devoted to portraying the Great War and its consequences in a new shade of light by emphasizing the complexity, importance, and power of its literature. I hope that I have succeeded.