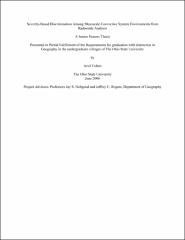 The prediction of the strength of mesoscale convective systems (MCSs), in terms of their potential to produce severe winds at the surface, is of concern to operational meteorologists. This study discusses meteorological variables derived from proximity soundings that are found to discriminate among long-lived severe wind producing MCSs known as derechos (DCSs), severe but non derecho-producing MCSs (SCSs), and weak MCSs (WCSs). These variables have been grouped into three categories: kinematics, instability, and moisture. Two-hundred sixty-nine warm season MCSs were rated based on intensity, and the stage of each system within the typical MCS life cycle. Decaying and dissipating MCSs were removed from the data set to focus on the most intense stages of the MCS life cycle. Variables were calculated from proximity soundings associated with each MCS, and statistical analyses were performed on these calculations. System-relative inflow and mid-level environmental lapse rates were found to be variables that discriminate among all three MCS environments. On the other hand, CAPE only discriminates well between WCS and SCS and between WCS and DCS environments. Mean mid- and upper-level wind speeds increase with increasing MCS severity, while low-level shear does not. Knowledge of the variables affecting MCS intensity permits improved forecasts and warnings of convective wind events.