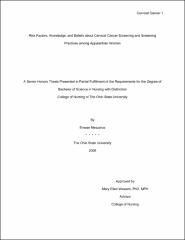 Background: A priority of the National Cancer Institute and Centers for Disease Control and Prevention includes research to promote cervical cancer screening in diverse populations based on socioeconomic status, race and ethnicity. Poor white population in rural Appalachia have greater cancer burden and resemble other minority populations such as African Americans and Hispanics (Friedell, Linville, & Hullet, 1998). Cervical cancer screening has greatly decreased mortality in the United States overall, but screening rates remain lower and mortality rates are higher within the population of Appalachian women (Freidel et al., 1992 & Hall, Uhler, Coughlin, & Miller, 2002). Objectives: The purposes of this study were to examine the relationships between: 1) knowledge and beliefs regarding cervical cancer screening and actual screening practices; and 2) risk factors of smoking and alcohol use and actual screening practices in a cohort of Appalachian women. Method: A secondary analysis was performed using data from a larger study conducted among non-Amish women residing in two Appalachian counties in Ohio. The target population for the primary study was women residing in Appalachian Ohio. All women completed a one hour health-related questionnaire conducted by trained interviewers. The secondary analysis examined those data that pertained to cervical cancer screening practices, smoking history, and alcohol use. Knowledge and belief-related barriers about cervical cancer screening were also described. Results: Results were analyzed using descriptive statistics and Chi-square tests. The sample size included 89 eligible participants whose mean age was 58 years (SD=15.3) with a mean education of 12.7 years (SD=2.1). Most women (59%) indicated having employer paid health insurance. In the past year, 72% of the women did not have a pap smear, or cervical cancer screening. Cost of screening was not significantly related to being screened (χ2 = 0.33, df= 1, p=0.56). Twelve percent of women were current smokers, 32% were former smokers, and 56% were never smokers. Chi-square analysis found no correlation between the women having received pap smears within the last year and their smoking status (χ2 =1.25, df= 2, p=0.53). In the past year, 15.7% of the women reported binge drinking. Although not significant, Chi-square analysis indicated a trend for non-binge drinking women to be less likely to have had a pap test (χ2 = 2.97, df= 1, p=0.085). Similarly, there was a trend for between current smoking and binge drinking (χ2 = 4.87, df= 2, p= 0.088). Almost all, or 92% of participants were knowledgeable about cervical cancer screening tests. Knowledge deficit items affected 14.6% of women, and 11% indicated beliefs which acted as barriers to screening.