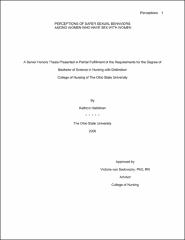 Purpose: The purpose of this study is to examine the perceptions of safer sex among WSW. Subjects: The sample consisted of 18 subjects with a mean age of 36.7 years (SD= 13.50, range= 20- 61 years). The sample was 94.4% Caucasian. Those employed full-time comprised 77.8% of the sample and the majority had attended graduate school. Half of the sample described their current partner status as married or partnered. Women who described their sexual orientation as lesbian or gay comprised 88.3% of the sample, while 16.7% described themselves as bisexual. All of the subjects reported having had sex with a female and 50% reported having had sex with a male. Methods: Participants completed a questionnaire consisting of 75 forced-choice and 5 open-ended items that assessed sexual risk, perceptions of safer sexual behavior, and how safer sexual behaviors and perceptions of risk vary according to gender of the sexual partner. The questionnaire was developed for the purpose of the study and has not been evaluated for content reliability or validity. Descriptive statistics were used to analyze the data. Results: Women reporting a lifetime diagnosis of an STD comprised 16.7% (n=3) of the sample. Genital warts were the only reported STD by these women. Other reported gynecological infections included yeast infection (72.2%), urinary tract infection (UTI) (38.7%), and bacterial vaginosis (BV) (11.1%). The sample was asked how often they practice safer sexual behaviors with women on a scale of 1 (Never) to 5 (Always). The mean was 3.3 (SD= 1.6). By sexual orientation, those that identified as lesbian (n= 15) believed they practice safer sex with female partners more often than those that identified as bisexual (n= 3) (M= 3.8, SD= 1.5 vs. M= 2.67, SD= 1.2). The average number of lifetime female partners was 4.53 (SD= 4.76, range 1-19). Of the women who had casual partners, 40% had used a barrier with the last casual female partner and 50% had used a barrier with the last casual male partner. With the last regular female partner, 5.6% had used a barrier and 40% had used a barrier with the last regular male partner. Conclusion: The implications for nursing practice are limited due to the small sample size. However, nurses working in areas of women’s health need to be aware of risk factors that exist for WSW. Women in this population share many of the same risk factors as heterosexual women. Many report having at least one lifetime male sexual partner. Despite misconceptions that exist, STDs are reported by WSW. Many of the women are not practicing safer sexual behaviors and they are aware that they are not. A possible explanation for the lack of safer sexual behavior use may be that WSW overall are not greatly concerned about acquiring STDs. There may be a need for nurses to provide WSW with STD education and the use of safer sexual behaviors to reduce risk. Victoria von Sadovszky, PhD, RN: Principal Investigator Kathryn L. Haldiman: Co-Investigator