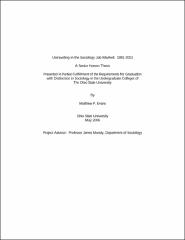 The following research investigates unraveling in two-sided matching markets and it’s prevalence within the sociological job market. Many two-sided matching markets can be found in a competitive arena where a dual hierarchy exists between groups such as employer and employee. Competition within this arena drives innovation (from market pressure or active participation) while each side of the hierarchy contains participants who attempt to pair with their optimal counterparts. Therefore, an academic institution would prefer to hire an assistant professor with high academic accolades and prestige, just as a new PhD would typically prefer to join as prestigious a university as possible. This thesis tests the sociological job market to see if such competition has progressively shifted deadlines earlier for all universities over time and whether the more prestigious universities are more likely to push deadlines ahead. Using the American Sociological Association’s Employment Bulletins from 1981 to 2003, a progressive shift to earlier deadlines has resulted in the top ranked universities setting the application due dates and the lower ranked universities having later application due dates. Advisor: Professor James Moody