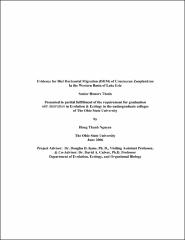 1. Diel horizontal migration (DHM) has been observed in zooplankton in shallow lakes where zooplankton are positioned close to the nearshore littoral zone during the day and migrate to the open pelagic waters during the night. The study of zooplankton DHM could help elucidate predator-prey relationships in lakes because zooplankton is a food source for young-of-year fishes and benthic invertebrates. A better understanding of zooplankton DHM and its effects on other communities, especially young-of -the-year fishes would greatly inform management strategies in both the littoral and pelagic zones of Lake Erie and other lakes. 2. The aim of this study was to establish if DHM of crustacean zooplankton occurs in the western basin of Lake Erie, focusing specifically on how predation (invertebrate and fish) affected zooplankton DHM. A 24-hour period (diel) study was conducted on 6 dates during the summer of 2005 with samples taken at midnight, before sunrise, midday, and before sunset at three sites: 2 nearshore and 1 offshore site. I examined both volumetric (#/L) and areal (#/m2) densities of zooplankton at each site to determine if zooplankton undergoes DHM. I hypothesized that there would be higher density of crustacean zooplankton in the nearshore sites than the offshore site during the daytime because of high fish predation pressure in the offshore. Contrastingly, I hypothesized there would be a higher density of crustacean zooplankton in the offshore during the nighttime due to reduced predation pressure. At the three sites, invertebrates and fishes were collected at each site to determine the effect of predation on DHM of zooplankton. 3. Zooplankton samples (N=78) were collected using a metered zooplankton net and preserved using a 4% sugar formaldehyde solution and then enumerated under a dissecting microscope with densities calculated using dilution techniques and flow meter data. I determined the densities of three taxa: cladocerans, cyclopoid copepods, and calanoid copepods, and the total of all these taxa combined. Also, I qualitatively examined the number of fishes and calculated zooplanktivorous invertebrate abundance at each site. 4. Zooplankton significantly differed by taxon (p<0.001) for volumetric and areal densities, and differed significantly by site (p<0.001) and taxon by site (p=0.001) for areal densities only. From the two-way ANOVA, there was only significance in cladocerans by site across all times (p=0.004) for the volumetric density, but for the areal density there was significance in all the individual taxa (calanoid copepods, cyclopoid copepods, and cladocerans) and total crustacean zooplankton by site (p<0.001). Also for the volumetric densities there was a significant difference for calanoid copepods by the interaction of time and site (p=0.041). At the offshore site the density of zooplankton decreased to its minimum at midday or pre-sunset and increased towards midnight. At the two nearshore sites the cyclopoid and calanoid copepod densities slightly increased at midday or pre-sunset and decreased afterwards. Biotic factors, such as zooplanktivorous fishes that were found at the nearshore sites and abiotic factors, such as turbulence, were likely responsible for the zooplankton DHM pattern.