Sex and Size: The Influence of Grammatical Gender on Object Perception in English and German 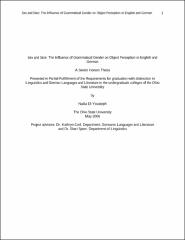 Does language affect the way we perceive the world? Do speakers of different languages perceive the world differently? If language does indeed affect thinking and perception, as recent studies have suggested, speakers languages that inflect nouns for grammatical gender, such as German, might perceive masculine nouns such as ‘skirt,’ ‘frog’ and ‘spoon’, which do not exhibit biological gender, as more masculine. Feminine nouns ‘fork,’ ‘table’ and ‘door’ might be perceived as more feminine, and neuter nouns ‘knife,’ ‘house,’ and ‘ship’ might be perceived as genderless. In this study, speakers of German and English were asked to make similarity judgments about pictured objects under timed conditions. It has already been demonstrated that the grammatical gender of words may affect perception to some degree (Boroditsky, et al., in press), and this study sought a partial replication of those results. In addition, to further test whether knowledge of grammatical gender affects the perception of objects, the present study included diminutive nouns (e.g. tummy, droplet, blankie, etc.), which are all grammatically neuter, formed from masculine, feminine and neuter base words in German in order to determine whether words such as ‘drop,’ whose roots are masculine in German (der Tropfen), would still be perceived by German speakers as masculine, or whether they would be considered more feminine because of cultural associations of ‘smallness’ with femininity.