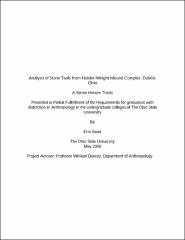 The Holder-Wright Mound complex of Dublin, Ohio consists of 3 earthworks and 6 burial mounds, created in the Middle Woodland period (100BC-400AD) by people from the Hopewell tradition, with 2 earthworks and 1 burial located in the north field and a south field with possible evidence of a settlement. This project seeks to analyze functional utility and spatial distribution of artifacts relating to the production of stone tools found at the site in order to better understand the use of the site during the Middle Woodland Period. Each recovered artifact was identified by artifact type (flake, core, biface, uniface, projectile point, natural), and fully measured with 21 attributes related to the production of stone tools. The lithics were then mapped in a distributional analysis of all artifacts as well as separate tool type maps to determine if specific activity areas could be identified. Last, the attributes of the lithics were graphed individually and together with similar attributes to further describe the stages of production as well as correlations between attributes and artifact types or rock types. Mapping shows no pattern to the distribution and no difference between the two fields, suggesting that the differing activity histories had no effect on surface artifact location. The lithic type maps again show no pattern which argues that the entire site was used in the same manner and the lithic debris may not be associated with the mounds due to the fact that there are no mound related accumulations and there are no mounds in the south field. Analysis of lithic attributes show that the toolmakers were fairly unskilled due to the number of poorly formed flakes. There is little evidence of final stages of toolmaking, possibly due to the poor quality of initial working, or due to the fact that this was not an important area for stone tool production. Graphing of attributes showed little difference between the two fields and expected distributions for flake characteristics. Graphing also showed an increased occurrence of burning in darker materials although the reason for this is not clear. The results indicate that the Holder Wright Site may have been occupied at different times by different groups and that the lithic debris may not be related to the mound construction and use.