The Effects of Decision Making Styles on Susceptibility to Marketing Techniques 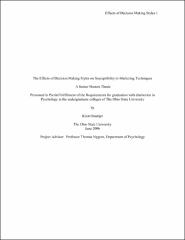