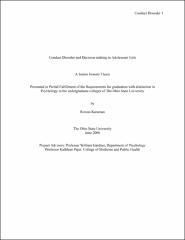 Thirty females, aged 15 to 18 years, 16 of whom had conduct disorder and 14 of whom were normal controls, completed the Iowa Gambling Task, a card game that replicates real-life decision-making. The task involved selecting cards over trials from four decks: two advantageous and two disadvantageous. The hypotheses were that the controls would have better performance on the task, which is indicated by a higher final score, choosing more cards from the advantageous decks and improving along trial blocks. A final questionnaire asked the girls whether they had discovered the strategy to the game. Inconsistent with data about disorders of social conduct and its deleterious effect on decision-making, participants with conduct disorder did not have significantly lower scores, greater picks of advantageous cards, improvement over blocks of trials, or a greater understanding of strategy.