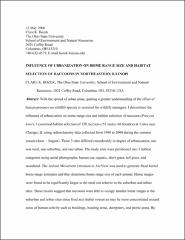 With the spread of urban areas, gaining a greater understanding of the effect of human presence on wildlife species is essential for wildlife managers. I determined the influence of urbanization on home range size and habitat selection of raccoons (Procyon lotor). I examined habitat selection of 120 raccoons (52 males, 68 females) at 3 sites near Chicago, IL using radiotelemetry data collected from 1996 to 2000 during the summer season (June – August). These 3 sites differed considerably in degree of urbanization; one was rural, one suburban, and one urban. The study sites were partitioned into 5 habitat categories using aerial photographs: human use, aquatic, short grass, tall grass, and woodland. The Animal Movement extension in ArcView was used to generate fixed kernel home range estimates and thus determine home range size of each animal. Home ranges were found to be significantly larger at the rural site relative to the suburban and urban sites. These results suggest that raccoons were able to occupy smaller home ranges at the suburban and urban sites since food and shelter resources may be more concentrated around areas of human activity such as buildings, housing areas, dumpsters, and picnic areas. By analyzing the radiotelemetry data using the Animal Movement extension in ArcView and compositional analysis, habitat selection of raccoons was examined at the second-order home range, the second-order core-area use, and the third-order home range scales. Human use areas received the highest selection at the urban site, intermediate selection at the suburban site, and no significant selection at the rural site. This illustrates the importance of anthropogenic resources to urban and suburban raccoons. By examining the use of human use areas, managers can better understand the needs and behaviors of this urban wildlife species.