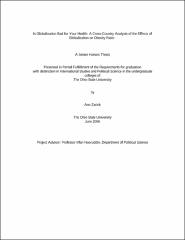 Globalization, the integration of goods, services, and ideas, the blurring of cultural and national autonomy, is revered for its positive effects on economic growth. Proponents of globalization praise it for its ability to raise income levels, in turn enhancing human development through increased education, literacy rates, life expectancy, better healthcare and lowered fertility rates. Charles Kenny states, “People in countries with higher GDPs per capita have longer life expectancies, lower infant mortality, better access to basic education, better protection of their political rights—the list goes on.” So while globalization in effect produces such positive effects on the overall health of a country, why are the highly globalized nations of the developed world, such as the United States, England, and France, experiencing increasing levels of obesity? With obesity being linked to so many diseases, are the factors leading to increased life expectancy hindering the healthiness of those lives? The issue of obesity has been covered extensively in recent years by the media and for good reason: “Obesity has reached epidemic proportions globally, with more than 1 billion adults overweight - at least 300 million of them clinically obese - and is a major contributor to the global burden of chronic disease and disability.” With England facing obesity rates of 21% for males and 23.5% for females and France dealing with substantial increases , it is not surprising that the obesity issue has drawn such attention in developed nations. While the main link between obesity and globalization definitely points to the increase in income level that allows for more general consumption, with a portion of that being devoted to food, the further implications of globalization for family structure, work climate, and diet also contribute to the rising levels of obesity in developed nations. Globalization affects the structure of work forcing longer days and weeks in order to meet the demands of international competition. Family structure is affected by an increased number of women entering the workforce, leaving less time at home for preparing and enjoying meals, thus increasing the convenience of fast-food and pre-made processed dinners. Globalization affects diet by increasing the availability of processed foods and the number of supermarkets and Wal-Mart Esq. establishments as well as decreasing the price of these products. This thesis examines these arguments through a cross-country analysis of England and France. The project tracks rates of obesity, and shows their correlation to factors such as: length of work-day, length of work-week, number of McDonald’s restaurants, number of females working, number of supermarkets, consumption of processed foods, consumption of fruits and vegetables, number of children per household and cultural trends. The results show an alarming correlation of these factors and increasing obesity rates. Finally, an analysis is given of the current obesity policies. Furthermore, this project gives insight into the real issues that need to be addressed when creating legislation to prevent and treat obesity. With developing nations facing similar obesity problems, this project contains knowledge that can be applied to them as well.