After the Bureau: The Rise of African-American Debt Peonage and Convict Labor in the South following Reconstruction 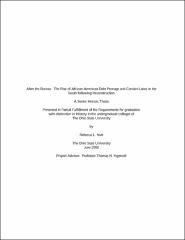 During Reconstruction, the Freedmen’s Bureau had the opportunity to effect significant change for the betterment of the southern African-American population. As a political and social voice for the freedmen, the Bureau provided temporary education management, labor support, legal representation and other services. As this study argues, the system began effectively and had the potential to establish a long-term agency that could have addressed the labor issues of African Americans well into the twentieth century. With its early demise in 1872 however, Congress closed up the Bureau, thereby, tacitly condoning the rising exploitive labor practices of debt peonage and convict leasing that existed from 1872 to 1944.