Redefining the Love Story in Early Twentieth-Century Spain: Carmen de Burgos as Woman Writer and Her Depiction of Love in Four Novellas 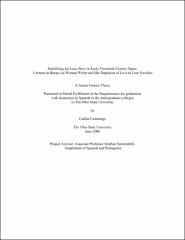 Compared to the more philosophical and experimental writing emerging from male writers during early twentieth-century Spain, the majority of women's writing during this time period has been viewed by some scholars in the past as entertaining, but hardly profound. My goal therefore, along with more recent critics, is to suggest the opposite. My research concentrates on a female Spanish writer during early twentieth-century Spain who I believe makes substantial contributions to understanding women, the relationship between the two sexes, and even society through her writing. This woman is the author/journalist Carmen de Burgos (1867-1932). In my thesis, I discuss the obstacles women writers face during this time period and how Carmen de Burgos surpasses them, both in her life and her depiction of love. In four of her novellas, she highlights women protagonists struggling in their relationships with men and emphasizes the ambiguous nature of love: its definition, consequences, and how it is attained/sustained with a man. My research methods included literary analysis of Burgos' works as well as investigating scholarly criticism on twentieth-century Spain, the status of women writers, feminism, and love theories. My investigation shows that what calls attention to the value of Burgos' writing is how she approaches and navigates this complicated theme in two ways. First, she represents the fascinating array of ways love can be defined and understood in individual relationships. Second, Burgos provides a detailed dissection of the female character and her path toward love. The women in the novellas want to engage in a successful loving relationship with a man, but they ultimately cannot. They all end up alone because they hesitate with their desires, criticize their actions/decisions, or become consumed by jealousy: all expressions of refusing to embrace their identity. Thus, having a low self-esteem acts as an automatic roadblock toward love. It is impossible for the woman to ever have a happy loving relationship with her man in this state. Whether a woman wants to perpetuate a relationship or end one, both should occur without self-criticism or shame. Self-acceptance is ultimately worth more than foolishly chasing after love and believing that it is necessary in order for a woman to be complete. Therefore, Burgos' depiction of love breaks the woman writer stereotype, offers an explanation of an elusive theme, and spreads an admirable message to women in a time and country where divorce is illegal, women have limited access to education, and the female's place is undeniably in the home. Ironically, the journey toward love is really about the individual rather than the couple. Love offers the chance to form a beneficial relationship with someone, but also to turn the focus inward and enjoy that freedom. A woman needs to be aware of and accept her identity and desires. Only then can love, or any other type of healthy human relationship, be possible.