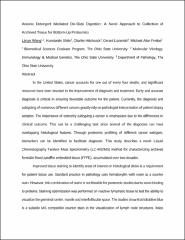 In the United States, cancer accounts for one out of every four deaths, and significant resources have been devoted to the improvement of diagnosis and treatment. Early and accurate diagnosis is critical in ensuring favorable outcome for the patient. Currently, the diagnosis and subtyping of numerous different cancers greatly rely on pathologist interpretation of patient biopsy samples. The importance of correctly subtyping a cancer is emphasized due to the differences in clinical outcome. This can be a challenging task since several of the diagnoses can have overlapping histological features. Through proteomic profiling of different cancer subtypes, biomarkers can be identified to facilitate diagnosis. This study describes a novel Liquid Chromatography Tandem Mass Spectrometry (LC-MS/MS) method for characterizing archived formalin fixed paraffin embedded tissue (FFPE), accumulated over two decades. Improved tissue staining to identify areas of interest on histological slides is a requirement for patient tissue use. Standard practice in pathology uses hematoxylin with eosin as a counter stain. However, this combination of stains is not feasible for proteomic studies due to eosin binding to proteins. Staining optimization was performed on reactive lymphatic tissue to test the ability to visualize the germinal center, mantle and interfollicular space. The studies show that toluidine blue is a suitable MS compatible counter stain in the visualization of lymph node structures. Mass spectrometry experimentation demonstrates that protein identification and quantitation through spectral counting are not affected by the use of this combination of stains. The second requirement for working with patient tissue is the ability to collect tissue from patient tissue slides for further sample processing. Biopsy samples are typically placed on positively charged glass slides. In cases where the tissue of interest is a minority in the total tissue on a slide, laser capture microdissection is used for specimen collection. Optimal LCM tissue capture requires special polyethylene naphalate (PEN) slides. Positive slides, used in standard pathology practice, are not amenable to laser capture and make tissue removal difficult. While mechanical collection of tissue with razor or scalpel is an option there are concerns of contamination due to the physical contact involved. A novel anionic detergent removal protocol was developed to neutralize the charge on the slide surface allowing for tissue release. An additional benefit to the use of anionic detergent is the ability to introduce endoproteases for protein digestion concurrent with tissue release. The final MS compatible sample can be collected by pipette from the slide surface for immediate MS analysis. Comparison of the collection of biopsy tissue using PEN slides, mechanical removal from positive slides and the novel on slide digestion/release approaches was conducted in this study. Patient tissue used for this study included normal lymph node, lung squamous cell carcinoma and thymoma subtypes A and B3. Our analysis showed consistent proteins coverage between the three methods. Quantitation by spectral counting revealed that protein abundances obtained from tissues processed by the mechanical and on slide digestion approaches were similar. Differences in protein abundance were noted, however, for the proteins obtained from PEN slices. The reason for this difference is hypothesized to be tissue association with the slide membrane. The optimized approach was applied to proteomic studies of human lung neuroendocrine and thymoma cancers, which have not been previously studied by proteomics. Direct tissues studies are essential as there are no cell lines that mimic these tumors. The proteomic analysis showed that lung neuroendocrine and thymoma subtypes can be distinguished based on protein difference. In summary, this methodology has enabled direct proteomic characterization of patient tissues in diseases where cell line models are lacking and diagnosis is histologically challenging and important to clinical outcome. These new methods will allow researchers to transition from in vitro cell line model to in vivo studies expanding our knowledge of the etiology of cancer while advancing clinical diagnosis and treatment.