Localized Corrosion and the Consequential Risks to Aircraft Aluminum Alloys 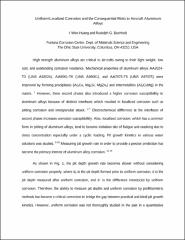 Aerospace aluminum alloys (2024-T3 and 7075-T6) are strengthened by heterogeneous phases and intermetallic particles, and rendering them vulnerable to localized corrosion. Localized weakness originated from corrosion defects, primarily pits, was shown to nucleate fatigue cracking subject to cyclic loading. Corrosion caused 22.4% of the non-available days for all USN/USMC aircraft in FY2009, where 80% of cracks in Navy aircraft initiate at corrosion pits. Therefore, the ability to assess and predict pitting corrosion kinetics is critical to aircraft maintenance and has been investigated by many researchers. Uniform corrosion, pitting, intergranular attack are the most common corrosion attack in practice. However, a quantitative uniform corrosion was rarely provided which leads to a pit growth kinetics without considering uniform corrosion. The kinetics could be misleading if the surface recession due to uniform corrosion was not properly accounted for. The purpose of this work is to conduct uniform corrosion measurement on aluminum alloy samples to make a correction on the concurrent pitting corrosion. Preliminary profilometric result showed uniform corrosion resulted in a great impact on pitting kinetics thus a vital correction could be made. In this work, pitting corrosion and uniform dissolution of aluminum alloys 2024-T3, 7075-T6 and 6061-T6 were characterized quantitatively using optical profilometry (OP) after free corrosion exposures in 0.01 to 1.0 M NaCl solutions as a function of pH, temperature and exposure time to mimic practical applications. A full factorial exposure experiment was carried out for each alloy in order to develop a statistic-based prediction model. Total uniform dissolution was estimated by carefully measuring the step height between the masked surface and the exposed surface. All measured data were normalized as inputs for Artificial Neural Network (ANN) for pattern recognition. A properly trained ANN model would be able to predict uniform corrosion according to specific exposure condition. The ultimate goal of this study is to develop a prediction model corrected by uniform corrosion that can greatly reduce the cost of aircraft maintenance. The mechanism of uniform corrosion will also be addressed in this presentation.