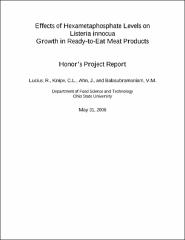 U.S. meat processors are currently looking for intervention methods for preventing growth of L. monocytogenes during and after cooking of Ready-to-Eat (RTE) meat products. RTE meat products do not require further heat treatment before consumption and are often eaten directly out of the package. Phosphates, already a common ingredient in meat, have shown varying degrees of inhibition of different pathogens. At high concentrations, some phosphates have caused off-flavors in meat products. Due to its neutral pH, sodium hexametaphosphate (HMP) causes less flavor problems. Sodium hexametaphosphate has shown some inhibitory effectiveness with S. typhimurium, S. aureus and C. botulinum. With L. monocytogenes, only 0.5% HMP in agar has been studied; additional research needs to be conducted on the use of HMP and Listeria in actual meat products. The objective was to determine if HMP addition in fully-cooked meat products had an antimicrobial effect on L. innocua growth over time. The effect of phosphate concentration was also analyzed. Beef roasts were prepared using fresh beef, 0.5% sugar, 1.75% salt, water (30% brine solution), and sodium hexametaphosphate. Phosphate treatments included a control (no added phosphate), 0.5% and 1.0% sodium hexametaphosphate. Meat mixtures were cooked in a smokehouse to 170ºF internally and inoculated with L. innocua, serving as a surrogate to L. monocytogenes. Samples were plated on Modified Oxford Selective Agar initially and after 3, 6, and 9 days of refrigerated storage. Results showed no significant difference existed between replicates. However, there was a significant interaction between treatment and day. A significant difference between phosphate levels was not experienced until L. innocua had grown to Day 6. Data of growth from Day 9 graphically showed a clear trend between levels, but the data points were too spread out to be significant. Analyzing the effect over time, control and 0.5% HMP showed a significant difference, indicating that the microorganism grew during refrigerated storage. One percent phosphate was not significantly different, indicating a bacteriostatic effect on Listeria innocua. Implications of this are that 1% sodium hexametaphosphate can serve as a bacteriostatic agent against L. innocua growth in cooked meat products. The current limit of phosphate allowed by USDA FSIS is 0.5%, however, that level of phosphate showed no significant inhibitory effect. If further research confirms that concentrations of HMP greater than 0.5% contribute antimicrobial benefits, companies should petition the USDA FSIS to reassess critical limits for HMP given its added function in meat products because food safety is the number one issue facing the meat industry.