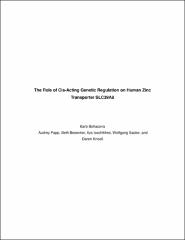 We previously reported that zinc deficiency predisposes the lung epithelium to apoptosis during conditions of inflammatory stress.1 Human zinc transporters comprise a family of 24 proteins and have a primary role in zinc homeostasis. All 24 transporters were examined in human epithelial cells and shown to have consistent levels of expression from donor to donor.2 We have previously observed that primary cultures of human upper airway epithelia obtained from multiple human donors exhibit a marked induction in SLC39A8 gene expression when exposed to the inflammatory cytokine tumor necrosis factor alpha (TNFα). In sharp contrast, expression of all other zinc transporters remains largely unchanged. Therefore, we contend that genetic variability in SLC39A8 may confer changes in zinc regulation leading to differences in inter-individual variation in response to inflammatory stress. The NIH SNP database was used to identify two candidate SNPs of high frequency (<40%) in the 3’ UTR region (rs.9331& rs.9705) and one nonsynonymous SNP in the exon region (rs.13107325) of SLC39A8. Using PCR amplification and restriction enzyme digestion, 89 human small bowel samples were genotyped for each SNP. A SNaPshot assay was used to identify cis-acting genetic variability, in the form of allelic expression imbalance (AEI), in all heterozygous samples for each SNP. The promoter region was studied in silico to identify SNPs that harbored within transcription factor binding sites (TFBs). SnaPshot analysis revealed allelic imbalance in 1 sample out of a total of 28 heterozygous samples (obtained from 89 original donors). The overall frequency of cis-acting dysfunction in SLC39A8 gene expression appears to be minimal, but conditions in cytokine induced cells as well as lung epithelial cells remains to be studied. The promoter region shows that candidate SNPs do exist within putative TFBs and will be evaluated in future studies.

Except where otherwise noted, this item's license is described as Attribution-NonCommercial-ShareAlike 2.5 Generic