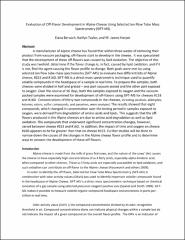 A manufacturer of Alpine cheese has found that within three weeks of removing their product from vacuum packaging, off-flavors start to develop in the cheese. It was speculated that the development of these off-flavors was caused by lipid oxidation. The objective of this study was twofold: determine if the flavor change is, in fact, caused by lipid oxidation, and if it is not, find the agent causing the flavor profile to change. Both goals were met by using selected ion flow tube-mass spectrometry (SIFT-MS) to evaluate two different lots of Alpine cheese, #153 and #160. SIFT-MS is a direct mass spectrometric technique used to quantify volatile compounds in the headspace of a sample in real time. To prepare the samples, both cheeses were divided in half and grated – one part vacuum sealed and the other part exposed to oxygen. Over the course of 56 days, both the samples exposed to oxygen and the vacuum-packed samples were examined for development of off-flavors using SIFT-MS for cheeses #153 and #160. Concentrations of thirty-two compounds in the cheeses, including alcohols, aldehydes, ketones, esters, sulfur compounds, and pyrazines, were analyzed. The results showed that eight compounds, which changed in concentration over the testing period in samples exposed to oxygen, were derived from degradation of amino acids and lipids. This suggests that the off-flavors produced in the Alpine cheeses are due to amino acid degradation as well as lipid oxidation. The compounds that underwent significant concentration changes, however, varied between cheese #153 and #160. In addition, the impact of time and oxygen on cheese #160 appears to be far greater than that on cheese #153. Further studies will be done to narrow down the causes of the changes in the Alpine cheese flavor profile and to determine ways to prevent the development of these off-flavors.

This thesis received a third place award in the Agricultural Sciences category at the 18th annual Denman Research Forum.