A World of Synthetics:Existing Condition 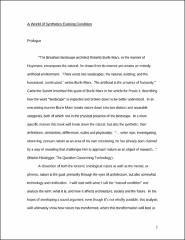 Nature is the origin from which all architecture and technology has derived. The primitive hut was the first instance when man manipulated the landscape for better utility transforming the natural landscape into the synthetic landscape. Over time the influence of these synthetic landscapes has grown with the expanse of civilization and knowledge. Knowledge, acting as a catalyst for control, allows the natural conditions to become logical and numerical ultimately replacing the natural with the synthetic. The natural condition is broken down into two categories: the cognitive natural condition; the physical natural condition. The cognitive natural condition is our perception of nature and how we believe or how we know it to exist whereas the physical natural conditions are the processes and spatial ontology of nature from which the cognitive nature was born. The physical natural condition exists as man’s lack of knowledge of the physical world, accepting what is not understood either through belief in chaos, religion or un-substantiated law. Throughout time these conditions have slowly been erased as man’s knowledge has expanded bringing control to the chaotic, reason to the illogical, and purpose to existence. In 1993, however, a sudden shift happened when knowledge expanded dramatically and the cognitive natural condition was abruptly erased. The GPS / GIS system launched by the United States Air Force is a matrix of satellites that map the earth’s surface to a resolution of less than 6 inches. This mapping has since gone public, from portable GPS handheld devices to computer programs like Google Earth, which allow anyone to see aerial photographs, maps and geographic information for anywhere on earth at any time. Rapid growth of general knowledge was gained from the GPS / GIS system, so rapid that the cognitive nature (the nature that we imagine or know to exist) is fully controlled and ultimately deleted. Not to be mistaken with the gradual deletion of the physical natural condition, which still exists and still is mostly uncontrolled, this deletion happened in the cognitive aspect of nature alone. The rapid change in technology, material, information and technique that occurred in 1993 resulted in a paradigm shift for architectural practice. Its importance to the field is inherent in the connection of architecture with nature (acting as the mother which borne the built form), and architecture to civilization. Nature has been the backbone and tabula rasa of architecture throughout history and with its deletion comes the requisite for a new understanding and appreciation of how the world is structured and where architecture fits into the contemporary. The invisible periphery of the individual site has typically been the boundary of the survey and maybe a few surrounding city blocks, but a building’s design now has larger connotations and can no longer be looked upon in this isolated, closed-loop view. Through knowledge the synthetic has become the new real via technology and the GIS / GPS system which has brought a graphical globalization to architecture (even though the field has mostly ignored it). More than one hundred years ago two Ohioans became the first in flight and until recently the architectural implications of flying have been overlooked by practitioners. When studying this precedent for the development of architectural theory, the implications for GIS / GPS on architecture could take just as long to realize. Since architecture has, throughout history, represented the zeitgeist of a civilization, how can it still maintain that status when it takes decades to catch up with potential significances of the technological advancements of that society? The truth is that it cannot hold claim to the popular or the avant-guard of such a civilization. Simply utilizing modern technology in the field is not the same as understanding the potential positive and negative ramifications of that technology either. The GIS / GPS system has, along with deleting the cognitive natural condition, graphically globalized the populous unlike any other time in history, and an understanding of this is imperative as a means for maintaining the status of architectural practice as society’s ambassador.

With Distinction in Architecture