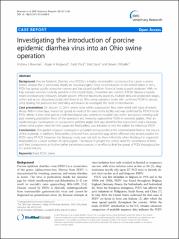 Background: Porcine Epidemic Diarrhea virus (PEDV) is a highly transmissible coronavirus that causes a severe enteric disease that is particularly deadly for neonatal piglets. Since its introduction to the United States in 2013, PEDV has spread quickly across the country and has caused significant financial losses to pork producers. With no fully licensed vaccines currently available in the United States, prevention and control of PEDV disease is heavily reliant on biosecurity measures. Despite proven, effective biosecurity practices, multiple sites and production stages, within and across designated production flows in an Ohio swine operation broke with confirmed PEDV in January 2014, leading the producer and attending veterinarian to investigate the route of introduction. Case presentation: On January 12, 2014, several sows within a production flow were noted with signs of enteric illness. Within a few days, illness had spread to most of the sows in the facility and was confirmed by RT-PCR to be PEDV. Within a short time period, confirmed disease was present on multiple sites within and across breeding and post weaning production flows of the operation and mortality approached 100% in neonatal piglets. After an epidemiologic investigation, an outsourced, pelleted piglet diet was identified for assessment, and a bioassay, where naïve piglets were fed the suspected feed pellets, was initiated to test the pellets for infectious PEDV. Conclusions: The epidemiological investigation provided strong evidence for contaminated feed as the source of the outbreak. In addition, feed pellets collected from unopened bags at the affected sites tested positive for PEDV using RT-PCR. However, the bioassay study was not able to show infectivity when feeding the suspected feed pellets to a small number of naïve piglets. The results highlight the critical need for surveillance of feed and feed components to further define transmission avenues in an effort to limit the spread of PEDV throughout the U.S. swine industry.