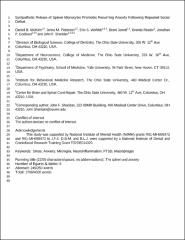 Background: Neuroinflammatory signaling may contribute to the pathophysiology of chronic anxiety disorders. Previous work showed that repeated social defeat (RSD) in mice promoted stress-sensitization that was characterized by the recurrence of anxiety following sub-threshold stress 24 days after RSD. Furthermore, splenectomy following RSD prevented the recurrence of anxiety in stress-sensitized (SS) mice. We hypothesize that the spleen of RSD-exposed mice became a reservoir of primed monocytes that were released following neuroendocrine activation by sub-threshold stress. Methods: Mice were subjected to sub-threshold stress (i.e., single cycle of social defeat) 24 days after RSD, and immune and behavioral parameters were then determined. Results: Sub-threshold 24 days after RSD re-established anxiety-like behavior that was associated with egress of Ly6Chi monocytes from the spleen. Moreover, splenectomy prior to RSD blocked monocyte trafficking to the brain and prevented anxiety-like behavior following sub-threshold stress provided 24 days later. Splenectomy, however, had no effect on monocyte accumulation or anxiety when determined 14 hours after RSD. In addition, splenocytes cultured 24 days after RSD exhibited a primed inflammatory phenotype. Next, treatment with a peripheral sympathetic inhibitor prior to sub-threshold stress blocked monocyte redistribution and prevented the re-establishment of anxiety in RSD-sensitized mice. Conclusion: The spleen served as a unique reservoir of primed monocytes that were readily released following sympathetic activation by sub-threshold stress that promoted the re-establishment of anxiety. Collectively, these data show that the spleen is capable of storing primed monocytes that promote exaggerated behavioral responses to acute stress, even many days after a sensitizing event.