We Were Cadets: ROTC Socialization vs. Self-Selection in the development of Army Officers 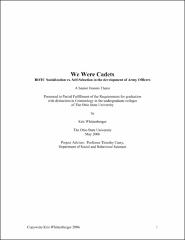 The following thesis looks at the socialization process of Army ROTC Cadets at The Ohio State University. While training to become Army Officers, Cadets go through many trials and epiphanies before they reach graduation. I studied which disposition had the greater impact on the development of process, self-selection to become an officer before military involvement, or the socialization process experienced through ROTC training. Some theorists predict self-selection is the most important because the military is a voluntary system, however others argued that involvement in training socializes Soldiers into adapting the beliefs and values of the Army as their own. To find the answer, I used my own life history and then interviewed 10 Cadets who were at the end of their ROTC journey. From my own experiences I believed socialization was the most critical element of officer development, however after compiling the interview results I found more Cadets were influenced by either self-selection or a mix of self-selection and socialization.