Computational Studies on Effects of Cocaine on Fast-paced Dopamine Neurons 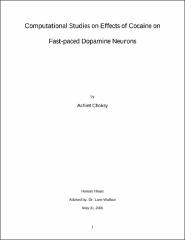 This project has investigated the effects of inhibition of the dopamine transporter on extracellular dopamine when dopaminergic neurons are electrically paced at rates substantially higher than those occurring in the brain. The project reported here has used computer simulation models of the data reported from such experiments to learn more about the dopamine transporter. The advantage of using this model is that only the extracellular parameters of dopamine kinetics need to be included, eliminated the need for a more complex model that also includes cytosolic kinetic parameters. The first part of the study evaluated four mechanisms by which the dopamine transporter can be inhibited. The second part of the study was to test the mechanism of action for nomifensin and cocaine based on variations of their effects in a pulse paradigm by patching the patterns of effects with the published results. The last part of the study was to show using a fast time scale increment the actual pattern of signaling after inhibition of the dopamine transporter.