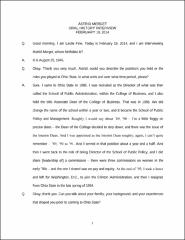 Astrid Merget describes her career at OSU, beginning with her appointment in 1986 as the Director of the School of Public Administration. It was her first academic position after spending time in a political appointment during the Carter Administration, but she had held academic positions before that, at Barnard College and George Washington University. Three years after coming to OSU, Merget was appointed as interim Dean of the College of Business, a position she held for a year and a half. Merget also discusses her experiences as a woman at OSU, both at the School and in the College, including her experience as a candidate for the Dean position at the College. She also talks about what remains to be done at OSU, particularly what she believes have been missed opportunities at the University for placing women in high-level leadership positions.