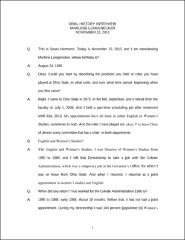 Marlene Longenecker describes her career at Ohio State, first as a member of the faculty of the Department of English, then as Director of the Center for Women’s Studies, and finally in a joint appointment for both the departments of English and Women’s Studies. She also discusses growing up in California, then earning a bachelor’s degree at the University of California at Riverside, and ultimately earning a Ph.D. at the State University of New York at Buffalo. She describes the beginning of the Women’s Studies program and its development into a department, and the National Women’s Studies Convention held at OSU in 1983 that helped forward that process. In addition, she discusses the atmosphere for women and minorities in the Department of English. She also talks about the evolution of Women’s Studies’ role on campus, and of the role of women faculty members in general on campus, as well as what obstacles remain for them.